Zeality partners with Media, Entertainment and Sports industries to deliver immersive media such as VR/360° video to their fans or audiences. 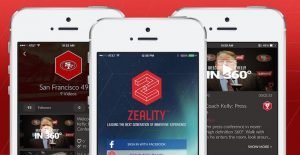 Zeality holds the distinction of having designed and developed the industry’s first ever cloud-based platform for integrating immersive media linking content, social engagement and commerce — the Immersive Media Engine (IME) which includes a management console and an SDK that can be integrated into mobile apps to enable unique immersive technologies.

Zeality technology has been successfully deployed by the San Francisco 49ers and San Jose Sharks.

Hello, my name is David. Entrepreneurs around the world hire me to execute their startup strategy and achieve their product vision dreams.

My passion is helping to build great companies, products, and services. I work with early stage startups to help prepare them for growth and investment. I have a proven track record of clarifying a vision and inspiring and engaging a team around that vision.